appalled by the treatment of Sri Lankan Tamils and Muslims,

click here to read more
http://www.freemalaysiatoday.com/2011/06/24/sri-lanka-envoy-accepts-memo-on-ill-treatment-of-tamils/
at 8:02 PM No comments:

Read More on the FELDA Suit

Read More on the Radiation Leak

SIVARASA "Why withold information...?"
http://www.themalaysianinsider.com/malaysia/article/pkr-demands-details-on-selangor-factory-radiation-leak/
at 12:45 AM No comments:

PRESS STATEMENT
17 June 2011
711 SETTLERS FILE SUIT AGAINST FELDA FOR FRAUD & BREACH OF TRUST CLAIMING LOSSES OF UP TO RM344 MILLION RINGGIT
This morning at the Temerloh High Court, 711 FELDA settlers from 16 Rancangan Felda Jengka in Jengka Pahang through their solicitors M/s Daim & Gamany, filed a suit against FELDA (1st Defendant) and FELDA Palm Industries Sdn Bhd (2nd Defendant) for fraud and breach of trust.
The settlers were contractually bound by the 1st Defendant to exclusively deliver their oil palm yield (hasil sawit) to the 2nd Defendant and they have always been paid at a lower rate of the oil extraction grade (Oil Extraction Rate (“OER”) for the last 15 years – averaging at 18.5% as stated in the Akuan Penerimaan BTS i.e. the receipt that is given for each truck delivery of fruit bunches. There is no clear basis or information on how the 2nd Defendant came to these different rates which were given on a daily basis at the point of each delivery.
The settlers suspected something were amiss when they realised that they could never match the recommended rate from the Malaysian Palm Oil Board which was higher. In January 2010, the Federal Court ordered FELDA to pay 11 million ringgit in damages to settlers in the Kemahang 3 scheme in Kelantan for cheating them over the oil palm extraction rate.
The settlers through their representatives sent random samples of their fruit yields to independent laboratories to assess the actual rate of the OER. The results from the lab tests showed a much higher average rate of 27%. This would mean a difference of an average 8.5% over the rate used by the 2nd Defendant.
We have evidence to show that in the year of 2008, the 711 settlers from the 16 Rancangan Felda in Jengka had delivered at average yield of 120 metric ton per settler. The settlers were paid by FELDA the average price of RM560 per ton the same year. Using the figure of 8.5% lost to the settlers, FELDA has caused a loss of RM257.60 per ton which works out to about RM30,912.00 to each settler for the year 2008 alone.
FELDA has also deducted their fruit yields improperly by deducting an average of 200 kg per month for disqualified fruit bunches but they did not return the fruit bunches to the settlers. This led to a further loss of RM 560 x 2.4 or RM 1344 per year per settler or RM 14,333,760 for all the settlers over the 15 year claim period.
This means that over the last 15 years, FELDA has caused a loss to these 711 settlers to the tune of more than RM344 million.
Through this writ summons and the process of discovery in court, we will obtain the exact production figures for all the other schemes involved here to compute the exact loss over the claim period to the settlers.
The settlers are also claiming exemplary damages as they contend that FELDA, as the statutory authority set up by law to look after the welfare of the settlers has instead exploited its position of power and authority over the settlers and committed fraud and breach of trust.
Released by:
Sivarasa Rasiah (Lead counsel for the settlers)
at 12:40 AM No comments: 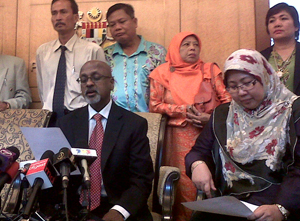 Radiation Leak at Factory in Selangor


I read with much concern the Bernama report yesterday of the statement issued by the Minister of Science, Technology and Innovation, Datuk Seri Dr Maximus Ongkili, on the radioactive contamination detected by the Atomic Energy Licensing Board (AELB ) in a factory in Selangor.

Although the statement claims that the four workers have gone through the decontamination process and that the premises have been sealed, this is just not reassuring enough to the public.

In the light of the LYNAS issue, the transparency of the government on this matter is of utmost importance and be made top priority if they are indeed practicing “Rakyat didahulukan”.

Why did the government withhold information on this radiation leak for almost 2 weeks? This incident came to light on 2nd June 2011 when 4 workers from the factory were detected with high radiation levels after they had gone to the AELB office. However it was only on the 15thJune 2011 that the Minister released his short statement. By not being transparent immediately about this event, the BN Government is showing its disdain for the health and safety of Malaysians especially the people of Selangor.

By only releasing part of the information and only now, the BN Government has possibly jeopardized the health and safety of our citizens. This is irresponsible of the Minister who must take all responsibility for any consequences resulting from hiding the facts from the rakyat.

I demand that Datuk Seri Dr Maximus Ongkili immediately release full information including the name, location and nature of business of the factory involved. The Minister should also disclose the type of radiation involved, half-life etc and all other relevant facts. How did the mishap happen? What went wrong? Is there radiation still leaking? This is absolutely necessary to allay the fears of the public and to prevent unhealthy speculation by them.

Further to this the Minister must also make public all reports and results of the investigations that have been carried out. We must also be informed as to how the Ministry intends to ensure that such a mishap does not happen again.

Member of the Political Bureau of Parti Keadilan Rakyat

Member of the Central Leadership Council of Parti Keadilan Rakyat.
at 12:14 AM No comments:

The Latest on the Nursery Issue 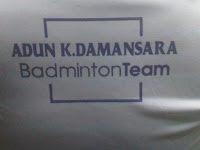 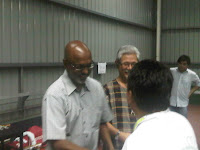 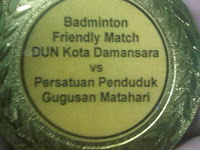 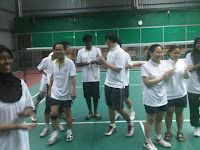