‘No sign of any penetration,’ says Anwar’s lawyer
By LISA GOH

Counsel R. Sivarasa, in his submissions for Anwar’s application to quash his sodomy charge, said that in Anwar’s case, penetration was the main and core ingredient of the alleged offence, and medical evidence was required beyond reasonable doubt.

He said the reports from Hospital Pusrawi had stated that, based on the medical officer’s observation, there was “no bleeding, no piles, no tear, no discharge, no abcess, no injuries” and that complainant Mohd Saiful Bukhari Azlan’s anus was “clean and normal”.

“When asked ‘Is there penetration?’, three doctors there replied that there were ‘no conclusive findings to suggest penetration to the anus’.

“In this case, medical reports from both Pusrawi and Hospital Kuala Lumpur show without a doubt that penetration was non-existent. This, in itself, is sufficient for the court to quash the charge as it is clear that no offence has been committed,” he submitted.

He said while there was no expressed provision in the Criminal Procedure Code for striking out a charge, the court had the inherent power to consider and grant such an application.

Sivarasa also submitted that the prosecution had malicious intent and was not impartial, as Attorney-General Tan Sri Abdul Gani Patail, whom Anwar alleged fabricated evidence in his 1998 “black-eye incident”, was still involved in the sodomy trial now.

Abdul Gani had signed a transfer certificate to move Anwar’s case from the Sessions Court to the High Court.

On March 10, Anwar, 62, claimed trial to sodomising his 24-year-old former personal aide at a condominium in Bukit Damansara here on June 26 last year.

Earlier this year, he filed the application to set aside his sodomy charge under Section 377B of the Penal Code, and that he be acquitted and discharged.

In his reply, Solicitor-General II Datuk Mohamed Yusof Zainal Abiden, who led the prosecution, said that according to the DNA report by the chemist, there were two male DNA specimens present from the DNA samples taken from Mohd Saiful, which supported his claim that he was sodomised by Anwar.

“The doctors said that there were ‘no conclusive findings to suggest penetration to the anus’. They didn’t say that there was no penetration,” he added.

He also submitted that while the courts had the inherent power to strike out the charge, it should be used very sparingly, and only when there was a clear miscarriage of justice.

“We submit that this is not a proper case where the court should exercise its inherent powers to quash or stay the charge,” Mohamed Yusof said.

Justice Mohamad Zabidin Mohd Diah fixed Dec 1 to rule on the application.
at 11:47 AM No comments: 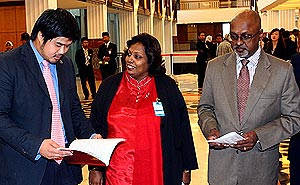 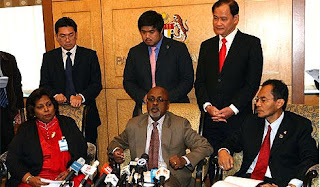 Nov 10, 09 1:37pm
Opposition MP R Sivarasa brought Jayanthi LG Naidu, who is said to be the 'key witness' sought by the Malaysian Anti-Corruption Commission (MACC) in the VK Lingam case, to Parliament today.
This was to disprove Minister in the Prime Minister's Department Mohd Nazri Abdul Aziz's statement yesterday that MACC could not contact a key witness in the probe.
Nazri had said that further investigations into the matter cannot be undertaken by the MACC as the key witness could not be located.
Hence, the anti-graft body had classified the case as 'no further action'.Jayanthi however claimed that she has been available to assist MACC in their investigations at all times."The ACA (now MACC) have at all times been able to contact me earlier for my statement...
"After the announcement (written reply) by Nazri on Oct 23 (that no action would be taken), I called and asked the MACC who the key witness was that they were looking for."They were unable to answer me," she told reporters at Parliament.
[More to follow]
http://www.malaysiakini.com/news/117051
at 4:05 PM No comments:

PETALING JAYA: PKR leader Datuk Seri Anwar Ibrahim’s warning to party members to leave and join Umno is aimed at people like Zulkifli Noordin, whose actions are not in line with party policies.
PKR vice-president Sivarasa Rasiah said Anwar’s remark was also meant for party leaders who were squabbling publicly to be more disciplined and settle their disagreements internally.
“For instance, Zulkifli attempted to table several motions in Parliament which were not in line with party policies and without consulting party leadership,” he said.
Another vice-president, Mustaffa Kamil Ayub, viewed Anwar’s statement as a stern reminder to PKR leaders, especially those who were willing to cross over to Umno or other Barisan Nasional component parties.
“It might also be a way of reflecting the crisis we are facing now. The coming months are crucial to us since Barisan is mounting political attacks on PKR and Pakatan Rakyat.”
PKR strategic director Tian Chua said Anwar’s remark was a call to leaders and members to stop petty squabbles and uphold the party’s struggles for reforms, social justice and democracy.
“He (Anwar) is not asking people to quit simply but rather asking them to focus on real issues and stop being worked up or distracted by personal differences. We can tolerate differences as long as we uphold the party’s principles.”
On the relationship between the PKR and PAS reportedly being affected by their internal crises, both Sivarasa and Mustaffa Kamil denied that cooperation between the parties was deteriorating due to their problems.
Several elected representatives have quit the PKR out of dissatisfaction, including Port Klang state assemblyman Badrul Hisham Abdullah.
“The PKR-PAS relationship is solid as ever,” said Sivarasa, adding that PAS asking its Selangor chief Datuk Dr Hasan Ali to explain his controversies with Pakatan colleagues was clear message of its full commitment to Pakatan.
Mustaffa Kamil said the two parties, along with the DAP, would iron out arising issues during the Pakatan convention next month involving 1,500 delegates.
at 2:12 PM No comments:

The plight of PPR Flats

THE Petaling Jaya City Council (MBPJ) has put the blame on vandals who mar the image of Public Housing Project (PPR) flats in Kota Damansara, acccording to a press statement issued yesterday,

In response to the question raised by Kota Damansara assemblyman Dr Mohd Nasir Hashim and MBPJ councillor V. Panneerselvam, the statement signed by public relations officer Zainun Zakaria explained that many facilities in the PPR flats were out of order, damaged or even missing due to vandalism.

“Vandalism is burning a hole in the council’s coffers and it is hard to monitor. The council and the contractor have carried out many repairs but the problems still persist,” she said.
It was learned that the council had appointed Tetuan Melati Evergreen Enterprise to keep PPR Kota Damansara clean.

Following the complaints, the council had also pledged to check the buildings more regularly to ensure that the contractor delivers what had been stipulated in the contract.

“It is saddening that unscrupulous individuals vandalise the units on top of stealing electrical components and other fixtures. Some use the units to store used items.

“This is proven during Dr Nasir’s visit that tenants of 11-01 Block A dump the rubbish they collect into the nearby vacant units,” she added.

Therefore, she said it was decided that repairs would only be done on the vacant units if someone applied to occupy or if the units were used to shelter disaster victims.
Following the report in StarMetro last week, the contractor had fixed the damages and cleaned the area with the help of residents through a gotong-royong.

The contractor had been instructed to ensure that the vacant units were locked to prevent intruders from vandalising and dirtying the place, while the Engineering Department would repair the faulty elevators that had indirectly caused many units beyond Level 10 unoccupied.
The statement also explained that flooding in the area was caused by construction on the PKNS land located next to Block A, adding that the matter had been forwarded to them.
at 2:01 PM No comments:

Subsidiaries owe MBI RM450mil
By SALINA KHALID
THE Selangor state subsidiaries owe Menteri Besar Incorporated (MBI) more than RM450mil, Mentri Besar Tan Sri Abdul Khalid Ibrahim said.
He said the state had detected some irregularities in several of these state subsidiaries’ financial accounts after the restructuring exercise and review of Menteri Besar Incorporated last year. MBI is the parent company of all the state subsidiaries, and as the Mentri Besar, Khalid serves as the chairman of MBI.
“We did an analysis of all the assets and liabilities of these companies and detected substantial amounts owed by these subsidiaries to MBI.
“We are now making a concerted effort to collect all the amount owed by these companies and to make sure they pay up.
For you: Sivarasa (left) presenting a hamper senior citizens and the poor at the Deepavali Open House
“The money can be used for a lot of things for the people in the state,” he said.
He said, so far the amount detected was about RM450mil, but it could be higher.
He added that these debts were incurred from various sources, including the sale of properties and land, various projects and other activities whereby the subsidiaries were supposed to pay to MBI. However, the money was not paid to MBI.
“We want to return the rakyat’s money to the rakyat by making all these companies pay their debts to the state.
“This is my promise to the rakyat before the end of my term as Mentri Besar.
“It is something that none of the the previous Mentris Besar could do,” he said.
Khalid was speaking at the Subang Parliamentary Deepavali Open House held in Kota Damansara on Sunday.
MBI is not just a finance company under the state government; it also has the power to make contracts, acquire, enjoy, sell or transfer any movable and immovable properties under certain terms and conditions.
Following the restructuring exercise early this year, MBI serves as the sole investment body for the state.
Among the companies under its wing are Kumpulan Darul Ehsan Berhad, Permodalan Negeri Selangor Bhd, MSNS Holding Sdn Bhd, Pusat Pelaburan Selangor Berhad, Pendiddikan Industri Yayasan Selangor Berhad, Kumpulan Semesta Sdn Bhd, Bukit Beruntung Golf & Country Resort, Rantaian Mesra Sdn Bhd and Tourism Selangor Sdn Bhd,
When asked to elaborate on how the state planned to collect the amount owed by the subsidiaries, Khalid said it would be done by transferring the account to the state.
“To make sure that these companies do not forget to pay up, we will transfer the account to the state.
“That way, they will always remember to pay,” he said, adding that any transaction regarding the amount would be recorded in the state’s financial account.
He added that the matter would be discussed during the upcoming state assembly to be held from Nov 9 to 17.
Meanwhile, about 2,000 guests attended the Deepavali open house that was organised by Subang Member of Parliament R. Sivarasa.
Guests were greeted by Sivarasa and treated to lunch while being entertained with song and dance performances.
Also present at the event was state executive councillor Elizabeth Wong.
Khalid later presented hampers to the needy and senior citizens from the area.
at 6:07 PM No comments: