Saying NO to ISA 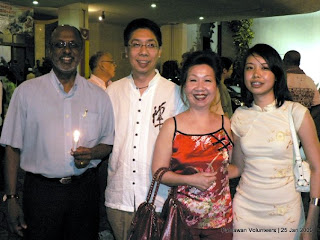 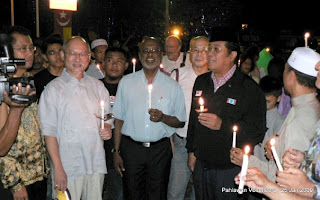 YB Sivarasa lending his support to the on going Say No to ISA weekly Mesra Rakyat gathering at the MBPJ compound. 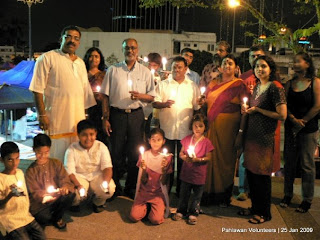 I would like to wish HAPPY NEW YEAR 2009
to everybody and to all our Chinese friends I say
Gong Xi Fa Cai
May this year of the Ox bring good health, propsperity
and a New Hope to our beloved country,Malaysia.
at 10:00 AM No comments:

The Star, AFP & NST May 11, 2008
Hindu Rights Action Force (Hindraf) supporters held nationwide protests to call for the abolition of the Internal Security Act (ISA), the freeing of ISA detainees and for detained Hindraf leader P. Uthayakumar to have proper medical treatment for his heart condition.
In Kuala Lumpur, some 50 supporters, including Subang Member of Parliament R. Sivarasa, gathered for half an hour in front of the Suria KLCC shopping centre in Jalan Ampang as some 200 policemen kept a close guard.
According to AFP, Siva said the government should release ISA detainees unless they had proof to charge them in open court. “As far as I am concerned, one day under ISA detention is too long, one ISA detainee is too many,” he added.
Malaysia’s ethnic Indian activists demanded that the government provide medical aid to one of its leaders. They also warned the government to free those detained under tough internal security laws or face more street rallies.
Uthayakumar and four other members of the rights group Hindraf have been detained under the tough Internal Security Act (ISA) since December after holding an anti-discrimination rally.
“This gathering is to send a clear message to the government,” Hindraf coordinator S Jayathas told reporters.
Hindraf leaders angered the government last November with a mass rally alleging discrimination in Malaysia, which is dominated by Muslim Malays.
Mounting anger within the Indian community was said to have been a factor in the ruling Barisan Nasional’s drubbing in 8 March polls where it lost its two-thirds majority in parliament.
at 10:29 AM No comments:

By Tan Karr Wei, The Star, May 27, 2008
THE Selangor Government is looking into ways to reduce unemployment in the state.
Bukit Lanjan assemblyman Elizabeth Wong said besides insufficient police personnel, unemployment was one of the reasons for the high crime rate in many areas in the state.
The other reasons include migration of people from rural to urban areas and the failure of town planning committees to include police stations and beat bases in new residential areas.
“A lot of graduates are unemployed. We are trying to get more investors into the state to provide more jobs. We also want more people to go into agriculture, especially locals, make transparent the licensing process for traders and hawkers and make welfare more accessible to those in need,” said Wong, who is also Selangor tourism, consumer affairs and environment executive councillor.
Together with Subang MP Sivarasa Rasiah, Wong joined about 150 residents of Bandar Utama, Petaling Jaya, in a walk around the neighbourhood to raise awareness of crime prevention.
Sivarasa said Malaysia had a ratio of about one policeman to 260 citizens while the international recommended ratio is 1:250.
“The problem lies in how they are deployed. Out of the 100,000 police personnel, one-third are doing administrative work while another one-third are in the public order and safety department. In short, we have a police force that is not deployed efficiently,” he said.
Sivarasa added that residents now had to organise safety measures like setting up guardhouses and boom gates at their own expense, which was not the long-term answer to the problem.
“This walk organised by the Bandar Utama Residents Association (BURA) is a strong signal to the authorities that as taxpaying residents, they want better security,” he said
at 10:26 AM No comments:

The Star, 30 May 2008
THE Selayang Municipal Council (MPS) should do its job and come up with a solution instead of blaming residents or hawkers at the wet market at Jalan BRP7/2, Subang MP R. Sivarasa said.
He added that the MPS should not heighten the existing tension between the two parties.
According to him, some traders had blamed the residents for complaining about them to the MPS. However, the residents said they were looking out for the best interests of the community and had asked for the traders to be relocated to a more suitable location.
“If MPS has already identified a permanent site for the traders, it should make the proper decision. The relocation is not an issue but a lack of transparency in the process is,” Sivarasa said.
He was speaking after meeting with a group of traders from the morning market as well as representatives from the residents’ association.
The traders, who had been trading at the site for the past four years, had staged a peaceful protest against the decision to relocate them.
Last year, MPS had given the traders’ notice of the relocation to a site some 1km away.
The traders claimed that the developer of the new site had asked them to contribute towards construction cost.
They also alleged that they were required to pay RM1,500 per trading bay in addition to rental and utility bills.
At a meeting on May 14, it was decided that the traders’ temporary business permits, which expire on June 21, would not be renewed.
Sivarasa said he would be meeting the MPS president to find out its stand on the issue, adding that MPS had a responsibility to resolve the issue.
“We will try and get MPS to allow the traders to continue at the present site until a decision has been made.
“We are still waiting for the new councillors line-up and MPS is expected to hold its first full board meeting at the end of next month,” he added.
Sivarasa also questioned the background of the developer of the new site and said he would refer the matter to the Anti-Corruption Agency if necessary
at 10:17 AM No comments:

NST, 30 April, 2008
RAWANG: The opposition’s Indian members of parliament have formed a committee to address issues faced by the community in the country.
Although the committee, led by R. Sivarasa (Subang) and S. Manikavasagam (Kapar), will table Indian-related issues in Parliament, it will also raise issues related to other races as well.
The committee will also come up with a guideline where assemblymen, too, can contribute to the cause by highlighting Indian causes.
Sivarasa said: “It will be an ongoing fight led by committed MPs to resolve many issues faced by Indians and to keep up the pressure on the government to attend to issues such as relocation of Hindu temples and to improve the physical condition of Tamil schools.
“Such problems (temples and Tamil schools) would be handled differently by us. Such issues have in the past raised questions on freedom of religion and human rights,” he said, without elaborating how differently they were going to handle the issues.
He said the formation of the select committee was also in line with the objective of the new Selangor state government to solve multi-racial problems at the grassroots level as it promised during its election campaigns.
He said the committee was formed because they believed that issues should be solved collectively.
“We do not believe in a one-man show. Any problem faced by anyone can be resolved by getting inputs from as many people as possible. The committee we are forming would play its role by liaising with all elected representatives to resolve the issues with consensus,” added Sivarasa.
at 10:13 AM No comments: