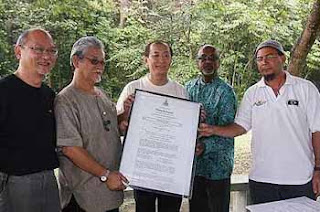 THE Selangor Forestry Department will conduct a land survey at the Kota Damansara Community Forest in Petaling Jaya.
Selangor Forestry Department senior assistant director Wan Abdul Hamid Shukri Wan Abdul Rahman said the forest area that had been gazetted was based on previous records and a proper land survey would be done in the near future.
Abdul Hamid, together with Subang MP Sivarasa Rasiah, Kota Damansara assemblyman Dr Nasir Hashim and Friends of Kota Damansara (FOKD) co-chairman Jeffrey Phang, were among those present at a press conference on Sunday at the entrance to the forest in Section 10, Kota Damansara, to announce the gazettement of the forest.
Working together: The residents have already come together to carry out various activities at the site.
Phang had mentioned in an earlier report that there was development going on in some areas of the gazetted forest.
Abdul Hamid said once the land survey was carried out, they would be able to determine if the plots of land were privately owned.
“If they have the grants for the land, then we would have to exclude those portions from the forest gazette,” he said.
Sivarasa said the forest would be used as an amenity and for research and education.
“The forest will be here for the community to enjoy and no developer would be allowed to destroy the forest,” he said.
Phang said the FOKD together with residents from Kota Damansara and its surrounding areas had fought hard for the past eight years to preserve the forest.
All smiles: The various representatives with the declaration gazetting the area
“There were plans to develop the forest in the RTPJ2 (Petaling Jaya Local Draft Plan 2) and we had formed the Green Voter to pressure the election candidates sign a pledge to keep the forest and they have kept their promise,” said Phang.
Dr Nasir commended the residents who had worked together as a group and stood firm in their efforts to save the forest.
“A lot of work has been done in the forest to make it more accessible to the public even before it was gazetted. We want the community to continue taking care of the forest,” Dr Nasir said.
Abdul Hamid added that the Forestry Department would also be conducting forest rehabilitation in the areas that needed it with the co-operation of residents.
“We will soon have meetings with the FOKD and come up with a management plan. If we can work together with the residents, it would minimise the use of state funds,” he said.
Phang said some of the facilities planned for the forest were to make it more disabled-friendly, to have a community centre for old folks and day care centre for single parents.
“It would also provide jobs for the Bukit Lanjan orang asli, some of whom are already employed by us,” Phang said.
at 9:25 PM