Sivarasa Stands Up For Tamil Schools 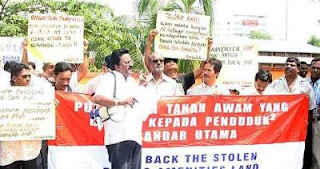 Protesters want alienated land returned to Tamil school
By BAVANI M
BANDAR Utama residents want MIC president Datuk Seri S. Samy Vellu to do the right thing by returning the 12,140sq metres of prime land that was originally alienated for the Effingham Tamil School to the people.
“It is good of him to acknowledge that it was an administrative error that had resulted in his name being listed as the beneficial owner of half of the land in Jalan BU11/1, but it has been almost five months since he apologised and we now want him to rectify the mistake and put things right,’’ social worker S. Bathavachalam said.
Bathavachalam said the land was designated for public use and should not be sold or transferred to any individual or political party, hence it was not suitable for the MIC to use it to build its headquarters there.
“We want MIC to return the land back to the school – it belongs to the people,’’ former student P. Kalaivani said.
Show of protest: The residents gathering outside the school.
Kalaivani added that the school had an enrolment of 600 pupils and the number was expected to increase in a few years.
Some 60 people, comprising residents and former students of the school held a peaceful demonstration outside the school premises on Sunday asking for the return of the land.
The school’s parent-teacher association had had a meeting in the morning with the school’s administration to find out the latest developments on the issue and the matter has also been referred to the anti-corruption commission.
The MIC and Samy Vellu came under fire recently when it was discovered that party president was named the beneficial owner of half of the land.
MIC secretary-general Datuk Dr S. Subramaniam had clarified last year that the land was owned by the party and there was an error in the description of the proprietor in the land title.
at 4:59 PM