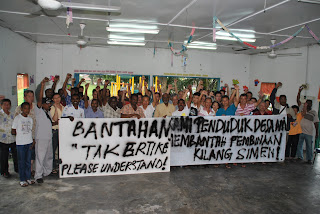 SUNGAI BULOH: Noise pollution and health risks from an illegal concrete-batching plant in Kampung Desa Aman here has got residents in the village all worked up.

Rumbling cement mixers, heavy lorries transporting sand, cracked pavements, dusty surroundings and the noise pollution are proving to a bane to the residents.

The company, RMC Concrete Sdn Bhd, cleared off a large section of a forest in Desa Aman in August 2010 to build the plant without permit or approval of the Selayang Council (MPS).

Angry and upset over the brazen attitude of the company, the residents brought up the matter to MPS councillor Zulnizam Shahrani who visited the site today.

“This is a stupid development (pembangunan biadap),” said Zulnizam.

“The area was zoned for light industries, not one that involves a lot of lorries going back and forth.”

Zulnizam said one of the other two legitimate concrete-batching companies, Evermix Concrete, has agreed to relocate its business elsewhere by June this year and the permit for the other company would not be continued.

RMC Concrete Sdn Bhd had applied for planning permission for its site but it was rejected by Zulnizam at an MPS Local Centre Committee (OSC) meeting in early October.

Oddly enough, the permission was approved one week later at another OSC meeting.

Zulnizam, who was not invited to be a part of the second meeting, found out about this much later in the year. Permission was then again denied at a third OSC meeting in January 2010.

However, according to state law, the multiple rejections and approvals meant that the case had to be forwarded to the State Planning Committee (SPC) for further investigation.

Subang MP R Sivarasa, who also visited the village today, said that the OSC episode was unnecessary, and has now led to legal complications.

“If the MPS had done the proper thing, rejected the planning pemission and left it, we won’t have an issue, and today you could demolish the plant,” he said.

Sivarasa said that it was not clear why the second OSC meeting happened the way it did, leading to Kampung Desa Aman residents’ troubles.

In the meantime, RMC Concrete, went ahead and completed the plant early this year, much to the chagrin of the village folk.

“The residents have complained. They asked how work can still be going on when the planned permission at the OSC has been rejected,” said a frustated Sivarasa.

He pointed to different types of sand piled up at the back portion of the batching plant, waiting to be mixed into concrete.

MPS has issued a stop-work order to RMC Concrete Sdn Bhd. It is also in the process of bringing the company to court for illegal earthworks and building construction.

Until then, the council is unable to demolish the plant, and is currently waiting for the SPC to complete its investigation and get back to them
at 5:29 PM