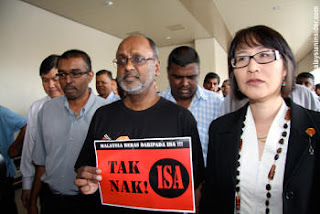 KUALA LUMPUR, Aug 3 — PKR vice-president R. Sivarasa, who was detained for allegedly taking part in the anti-Internal Security Act (ISA) rally in the federal capital on Saturday, was freed on bail today.

“I have just been released on police custody. I am not being charged at the moment. I am on police bail and supposed to report back on Aug 17. My main concern now is the remaining 30 arrested with me including two juveniles charged in court,” he said.

The Subang MP was among about 600 people arrested for taking part in the march against the ISA.

Sivarasa was brought to the Sessions Court this morning and released on police bail at noon. He has to report to the Dang Wangi police station on Aug 17.

Speaking to reporters on his release, Sivarasa said Saturday’s arrests illustrate the authoritarian behaviour of the Najib administration when violence was used to break up the peaceful rally.

He was shocked that juveniles were also among those arrested.

“The juveniles were not only arrested but also handcuffed contrary to lawful procedures. And also locked up with adult prisoners which is wrong,” he added.

Sivarasa questioned why the police applied to further remand the arrested when they could have been released on Saturday.

He was outraged that the police had attempted to remand the two juveniles.

“I want to ask the IGP and his political masters: what are you trying to do in trying to remand a 13- and 16-year-old? For God’s sake, what is in your mind?” he asked.

Sivarasa accused Barisan Nasional (BN) of sending a message by punishing the 30 people with court action.

He said this would not have any affect because Malaysians will continue to struggle for democracy.